*I had originally posted this tub of Edgeworh as a year 1926 tub, but after doing some research on dating tobacco stamps i was in error , so i have edited this post to correct the mistake.*

Back in late January or early  February i was scanning some online antique stores looking for pipes or pipe related items. I ran across this 1939 unopened tub of Edgeworth Ready Rubbed at a antique store in Canada .

(Scroll down to bottom of link )

I immediately contacted the seller and we worked out a price of the tub and shipping to me in Virginia. It ended up costing me less than a tub of the new inferior version of Lane Limited Ready Rubbed. Including shipping!

The lid and bottom had been dented out from within from the tobacco fermenting over the years, but i did not think that would be detrimental to the tobacco.

Unlike the two 1940 tubs i picked up last year upon opening this one it was dry and needed to be hydrated. Most likely caused from microscopic pinholes in the metal caused by the metal expanding.

Luckily the tub (unlike the 40s tubs) it was lined with wax paper and it kept the tobacco from sticking to the metal sides.

I placed the tobacco in a large square tub that i use for blending. I then  laid about six slices of bread over it and  latched the lid closed. After a couple of days the tobacco was like new. I then sealed it in a very old and large Square G  mason jar i rescued from what remains of a old  abandoned house that is nearby where i live.

Like the 1940’s Edgeworth i have all i can say is WOW after smoking a few bowls of the 1939 version.

Such a rich and well smoking tobacco .The high quality ,nutty and molasses tasting  burley tobacco is just outstanding . The molasses smell in the jar is just heavenly. It burns cool and to a fine ash. The cut allows it to pack and burn perfectly.

The new  Lane Limited version to me is not in the same league as the original Edgeworth.

The packing  ticket that was inside the tub . 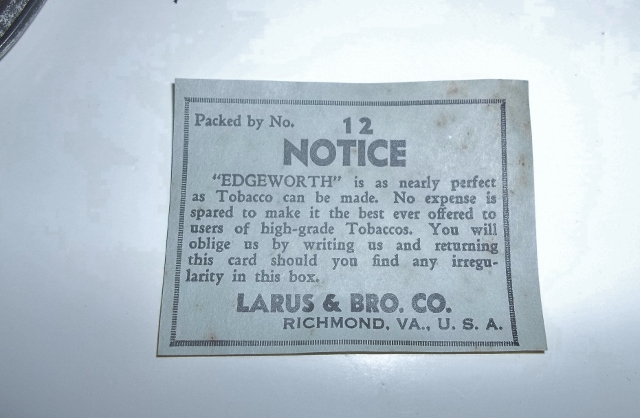 I only plan on dipping in this 1939 stash on special occasions. That’s my plan anyway . It’s sooooooo good  though its hard not to think about it sitting in my tobacco cabinet.