I picked up this pipe off Ebay on a “Buy it Now” auction for pretty cheap.

I liked the shape,size and color of the pipe. It looked to be in very excellent condition as well. Here is a couple of the Ebay pictures. It is stamped Capri /Italian Briar. 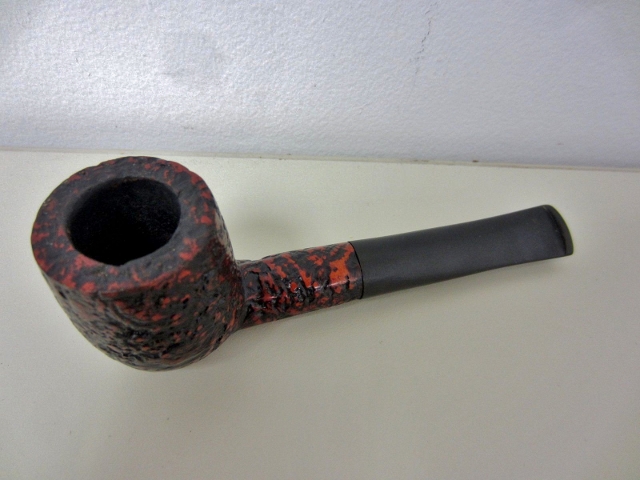 I thought it would be a good knockabout pipe for summer activities. Picnics, barbecue’s, horseshoe games, and the like.

While i waited on its arrival I did some research on Capri pipes. Seems Capri pipes are made for Brigham pipes in Italy by Leonessa pipes. They are sold widely in Canada as inexpensive pipes. I read someone called them the Dr.Grabows of Canada.

When the pipe arrived i was delighted at how nice it looked from the outside and thought to myself “this pipe will only take about a hour to clean up and buff”. Well I was wrong.

First thing i noticed was the pipe stem was really stuck. The most stuck push stem I’ve ever worked with. I placed the pipe in the freezer for a couple of hours and was able to remove it from the bowl with some hard twisting . Praying it didn’t crack the shank as I did  it. 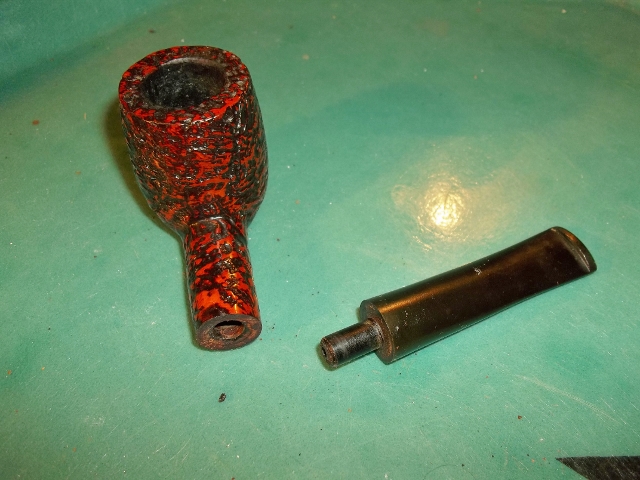 The bowl chamber had some rock hard, black tar looking residue in it . The stem was completely plugged as well. The cold had turned the black tar brittle and that was the reason I was able to break the stem loose.

I heated up a small screwdriver to insert in the shank and burn my way through to the bowl. Well when that very hot screwdriver hit that black tar the smell took me back to my misguided youth. It seemed someone had used this pipe to smoke marijuana in! As big as this billiard is they must have smoked the stuff like Cheech & Chong. 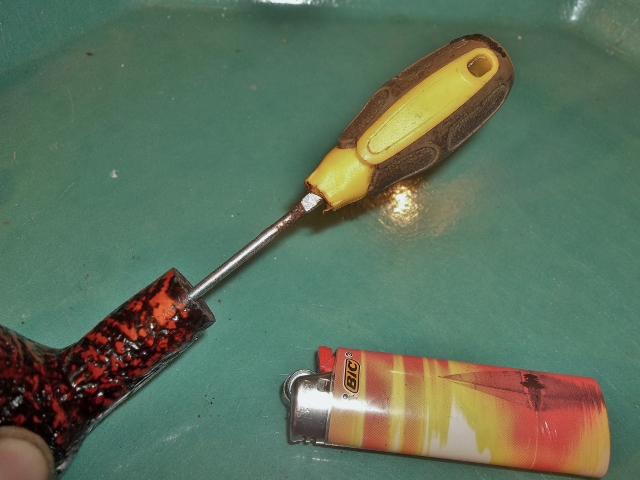 Well i knew i would have to take all that hard ,black marijuana tar out of it .So i got the pipe ready for a good ol salt bath. I plugged the shank with a couple of Q-tips wrapped with packing tape. I placed the bowl in a old butter dish with a rag under it.

I added alcohol to the salt and every few hours i would refill it. Always keep a rag handy when you do this to wipe off any alcohol might accidently  get on the pipe as quick as possible if you don’t want to refinish it. 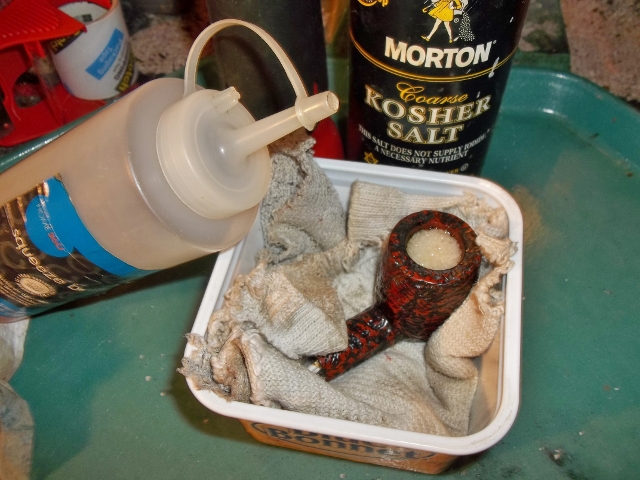 While the bowl had its salt bath I soaked the stem in 91% for several hours. I took it out every so often and ran bristle cleaners through it. It finally started to come out clean after a few times. 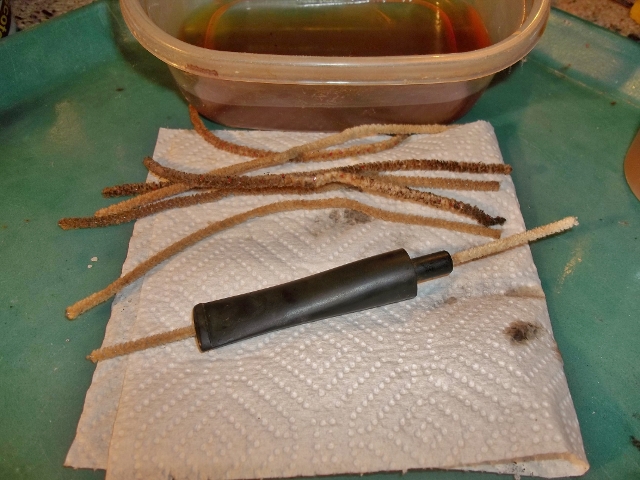 After two and half days of salt & alcohol bath i decided to give the bowl a go.

After cleaning it out and drying it with several cotton balls ,pipe cleaners and Q-tips i gave the chamber a scrub with steel wool . There was still residue left so i sanded out the chamber with some heavy grit paper. 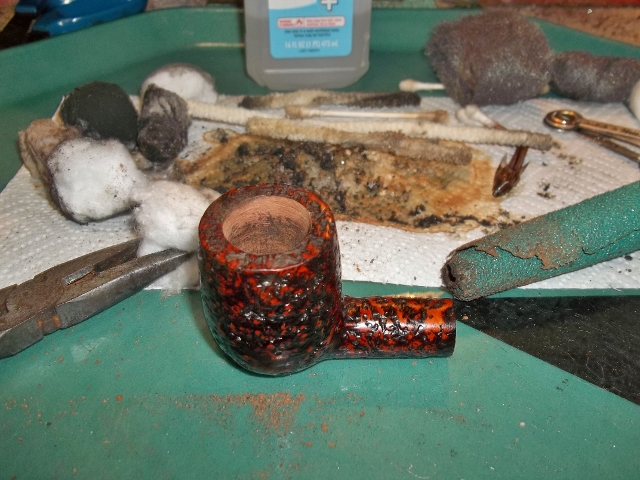 I also ended up running a drill bit through the shank by hand to clean out what was left in the shank.

With the bowl cleaned I turned my attention to be banged up bottom. Looks like the owner banged the bottom while knocking out the marijuana ash when they were done.

I wrapped the bowl in a damp rag and ran it over a iron a few times , steaming out what dents i could.

After that was done I gave the whole bowl a wipe down with mineral oil , inside and out. 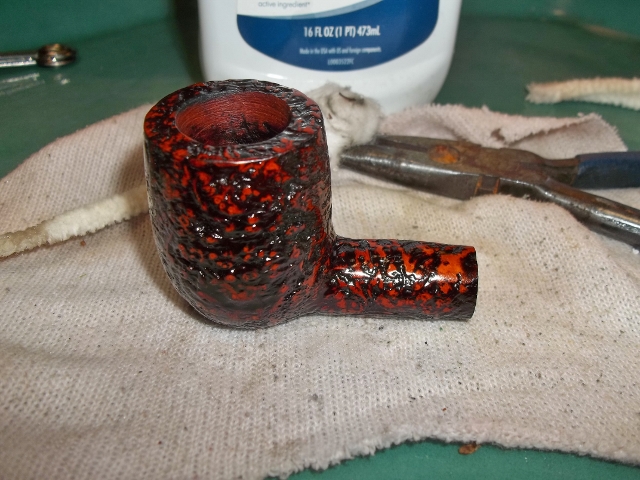 While the oil soaked in i went to work on stem . There was some light oxidation but nothing a quick bath in Oxy Clean  and a Scotch Brite pad could not take care of.

The stem was in very good condition  and only needed some light sanding of 800-2500 grit.

The stem still fit very tight so I gave the tenon a quick sand of 500 grit and a light coat of bees wax. Always apply the bees wax very lightly . Too heavy and it can crack a shank. You only need very little anyways.

I decided to give it a bowl coating just in case there would be any chance of ghosting from the marijuana. I used syrup cut slightly with hot water and coated the inner chamber with it. Filled it with carbon powder and let it dry. 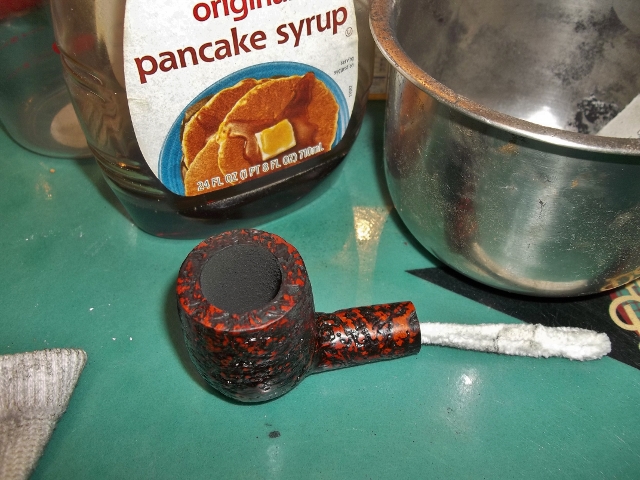 With bowl and stem back together and a final wipe of mineral oil the pipe looks to be ready for buff and wax. 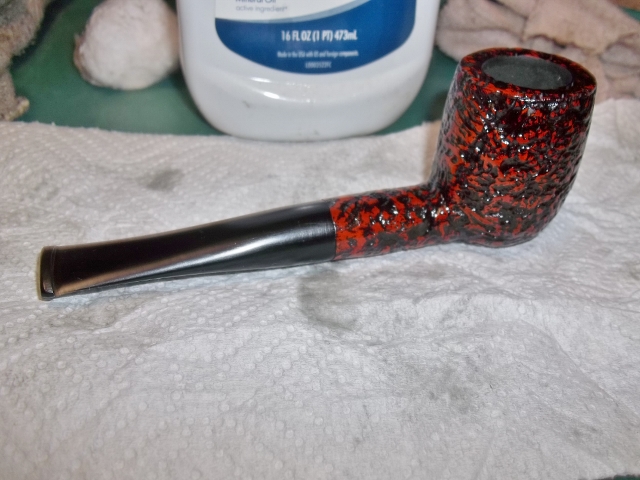 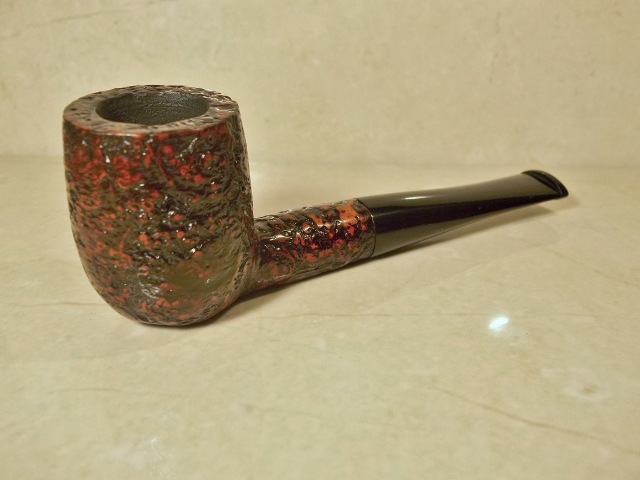 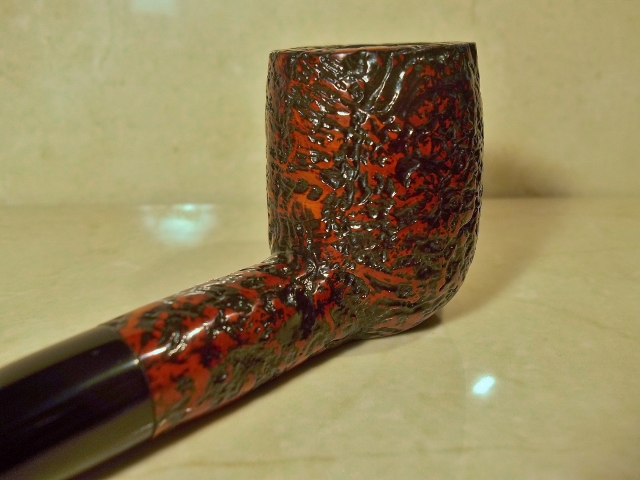 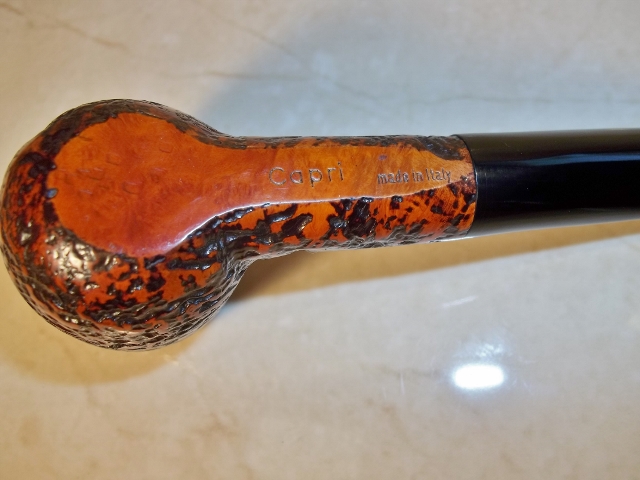 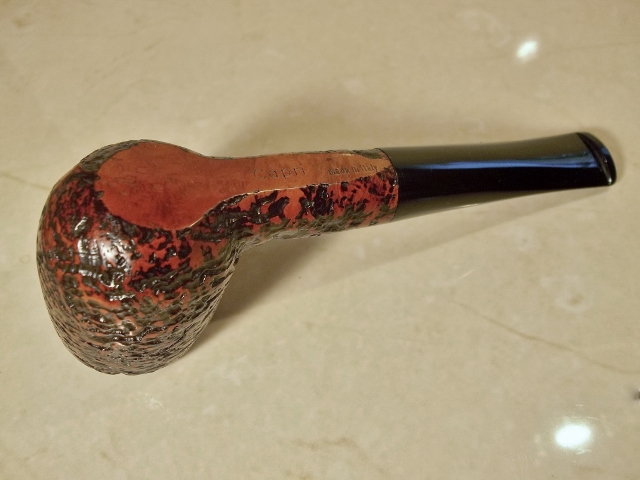 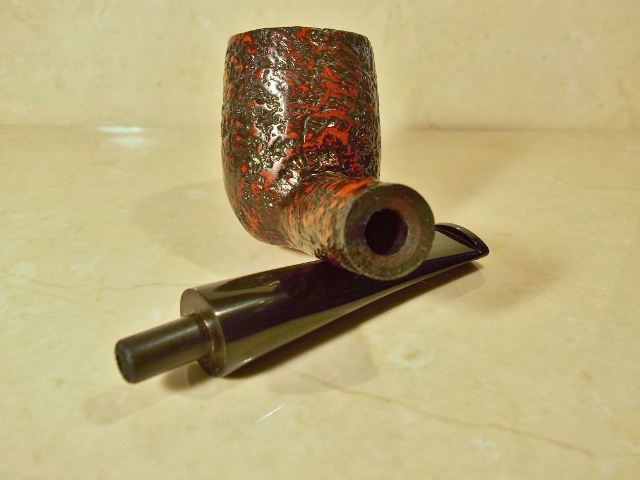 I have smoked a few bowls and did not have a hint of anything  other than the tobacco i was smoking. The marijuana presence has been vanquished.

The pipe smokes really well. It needs time to build up some cake as any pipe  chamber taken to raw brair , it burns just slightly on the hot side.

From  smoking mine i can say the Capri pipes are excellent, inexpensive pipes. The pipe looks good, smokes well and I like the wide stem at the button. It’s the same meaty ,wide stem size as my Savinelli’s. I find the stem very durable and a very nice one on a  inexpensive modern pipe. No chewy ,plastic feel at all. It’s very light for its size as well making for a comfortable clencher.

I wasn’t planning on posting this pipe on my blog as i thought it would just be a quick and easy clean up of a inexpensive modern pipe. After running into the marijuana problem i though i would post it in case anyone runs into the same thing and needs something to guide them out of how to get rid of it.

Good smokes to you.

7 thoughts on “Capri Billiard With A Unexpected & Unsavory Past”